Kit and I flew down to California for FC this past weekend. We went a day early to have some time to hang out with Trey and decompress before the actual con started. We’ve both been very work-focused recently so some time to chill out was nice.

This year I was not responsible for running any events or panels so it was a pretty “easy” con. Didn’t even attend too many panels. I wanted it to be a more social con than I usually manage. 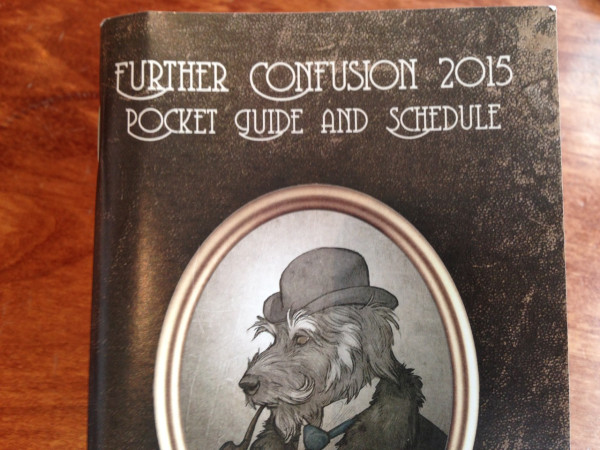 This year was a Victorian mystery theme. I’m not sure exactly what they have in mind with some of these con themes but I’ll at least give them points for creativity. (American Diner is next year’s.) So the three of us commissioned some Clue-themed badges from Mitti Mandy. (Note the character, room, and weapon details.) 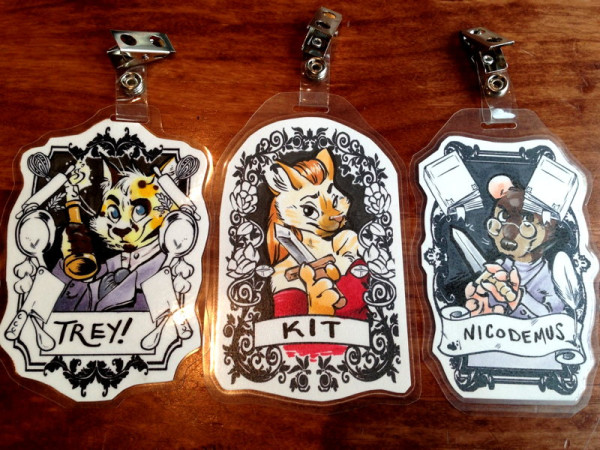 I did get to see a lot of fursuit friends. (Including other makers; thanks Lance for the pep talk!) Hugs were given and received. Fursuits always manage to be delightful; something in them is just inherently fun to me. Even managed to finally get a hug from Sparky, who vies with Kingsford for the “cutest dragon” title. :) 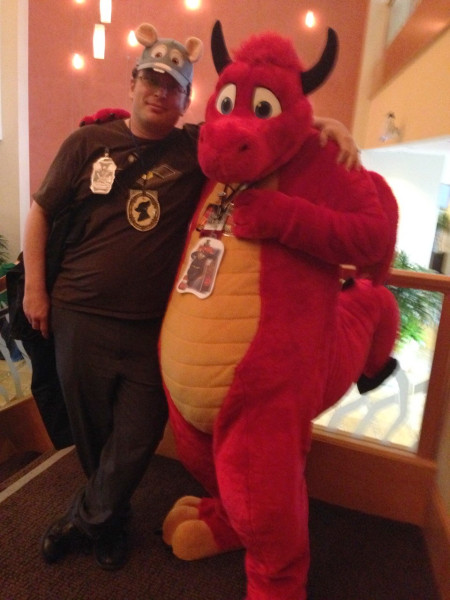 Got a chance to chat with some writing folks I know. (Thanks Kyell, Kit, Not Tube, and Rikoshi!) Didn’t get to see Fuzz Wolf except in passing. He’s the publisher of the anthology I’m in so was hoping to chat. But he runs a busy dealer table and I was scurrying back and forth so… con schedules work like that sometimes.

Speaking of schedules, the low point was the 4am fire alarm. Our floor was one of the ones evacuated. Managed to somehow get clothes on and get down the stairs. Our room was right next to the end stairwell, so that was convenient, but we were on the 8th floor, which was less convenient. (Especially as the elevators get soooo overloaded at the Marriott so most of the weekend I was doing stairs up and down for each room visit.) 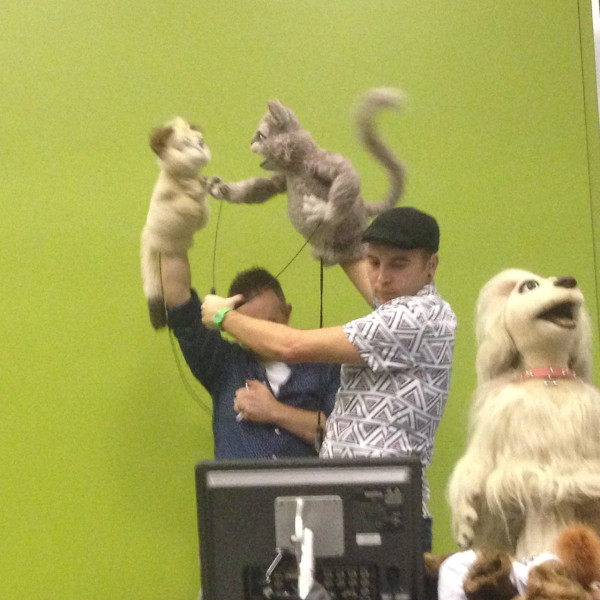 Great GOHs this year! Two of the puppeteers from the Mongrels TV series and various
Muppet productions were there. They brought most of the puppet cast of Mongrels, too! So I got a chance to really examine them and see details in the construction. One of the guys there was half of the team that built all the puppets too. 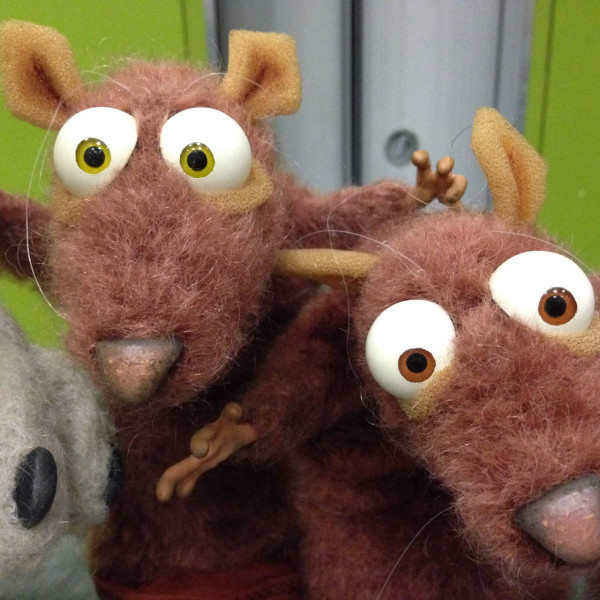 I asked him about coloring details and what sort of airbrush paint he recommended. He admitted “Airbrushing would probably be the proper way to do it but I just used colored markers.” I pointed out that he was the professional so markers must be a proper way! He did concede it seemed to get him by. :) 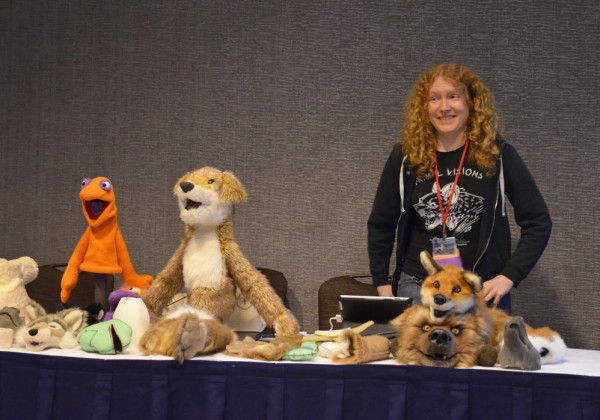 The other GOH was Lex (Alexis Rudd), also a puppet builder and performer, who’s worked for Folkmanis and Henson. I’ve actually known her for years now. Brilliant builder with such great enthusiasm and dedication. I really liked her panel on advanced construction techniques. She showed her work as well, both completed and as parts. 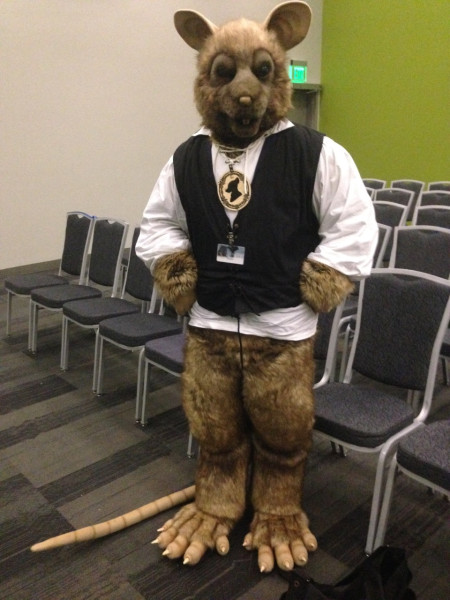 She also delivered a new rat fursuit for Sketch Ratner which is gorgeous! He was wearing it around so I got to see it several times. (And I met a new rat friend!)

Good times, all in all. Thanks to all my fine furry friends! (And a special thanks to Minnie and Scruff for delivering the new rat hat!) I look forward to seeing you at the next con. 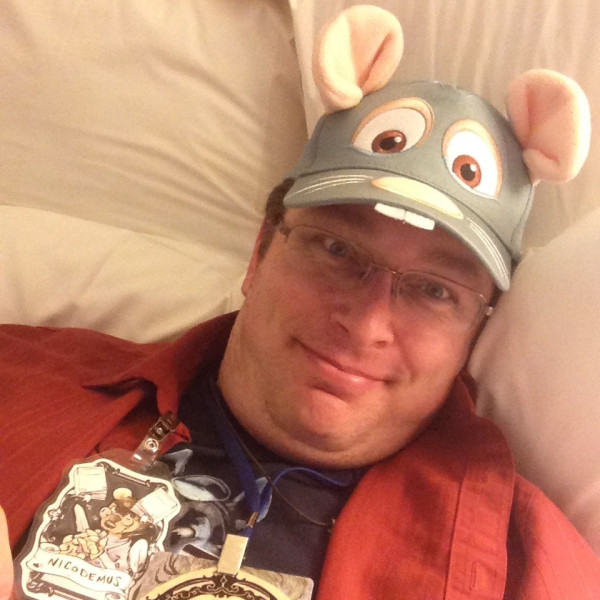