After many years of waiting (and many journal updates here), the New Horizons spacecraft is finally arriving at the Plutonian system!

They are already getting some fantastic new images showing the surface of the mysterious (dwarf) planet. New Horizons will have closest approach tomorrow, 7/14, and be beaming back heavy amounts of data starting tomorrow afternoon. So look for great images to show up in the news.

And it will be imaging other bodies as well during the pass. It'll particularly get good studies of Charon and Nix. Styx, Hydra, and Kerberos are small enough that images will only see them as 10-50 pixels across.

New Horizons is expected to make a closest approach of 12,500 km to Pluto as it barrels through. Note the scale of the system diagram below -- it will fly within Charon's orbit. (The idea being the debris in the accretion disc should be cleared in that band, with Charon acting like a shepherd moon, thus minimizing chances of a crippling collision.) 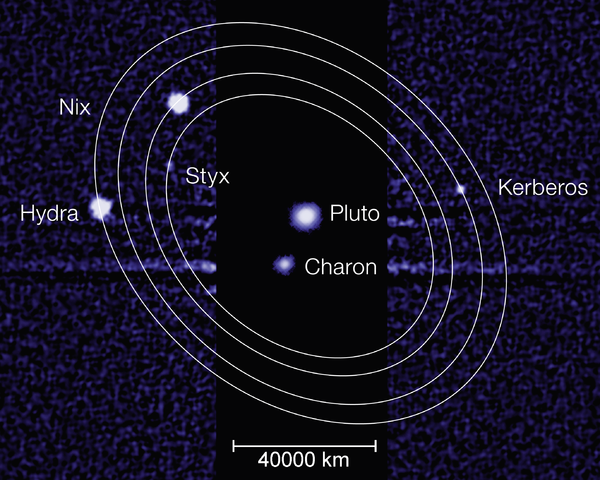 Kerberos and Styx are recently-discovered moons, in 2011 and 2012 (respectively). Think about it: We've discovered TWO new moons of Pluto since we launched this craft! That's how little we know about the oddball Plutonian group out on the edge of our solar system. Exciting exploration!
Collapse