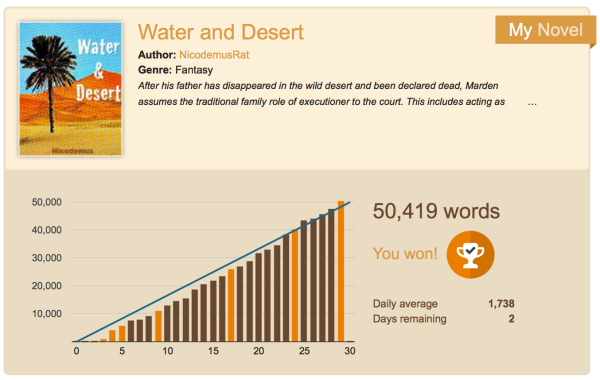 I started my next novel manuscript during this past month. I used the momentum of NaNoWriMo to get things jumpstarted. I did not expect to reach the 50K goal! I was writing during my normal times (commutes) plus a bit on weekends. I was helped, oddly enough, by a pre-Thanksgiving power outage where I nursed along my laptop battery (because typing doesn't use much energy compared to, say, YouTube videos). I even "finished" a day early.


If you're curious about that truncated story teaser:
After his father has disappeared in the wild desert and been declared dead, Marden assumes the traditional family role of executioner to the court. This includes acting as bounty hunter for those sentenced, tracking them between the distant communities in the dry lands. The high magistrate hands down his first assignment: capture and return his childhood friend and sweetheart, Alia, who has been condemned for practicing forbidden magic.
Collapse